Gabe Gluskin-Braun in front of his 2002 Honda Accord. Photo Credit: Shai Gluskin

What Gabe Gluskin-Braun’s (275) Honda lacks in fuel efficiency, it makes up for in comfort. When you step into this 2002 Accord, you feel like you’re in the midst of luxury; the seats are velveteen soft, the leg room spacious, and the dashboard free of chachkies. After a ride soundtracked by the sweet, sweet sound of Terri Gross’s voice on Fresh Air, you get out wondering, “Is this what it’s like to be royalty”?

That is, if you mean royalty in 2002. Gabe’s 2002 Honda Accord really brings us back–not in a good way. This car has somehow survived 13 years. This car is a man in the eyes of Jewish law, and as such, should be adorned with the same Kippah as its owner. The writers would like to see this Accord topped with the traditional Jewish headcovering.  A Car-Kippah™, if you will! 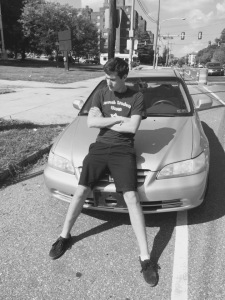 Not all his audio choices are as mature as his taste for NPR, though. Gabe also enjoys the tunes of the Puerto Rican rapper Daddy Yankee. The writers would rather have DJ Poppz (the notorious 275 Junior Prom DJ) choose the music. What’s worse is that he did NOT have an AUX cord. So whenever Gabe wants to play a specific song he pulls out his 5th generation iPod Touch™ and blasts his tunes from its tiny iPod™ speakers. Perhaps his biggest downfall was that he did not play any trap or “turn-up” music. Some Drake or Fetty Wap would have done the trick.

Though his music taste is certainly “unique,” what truly sets Gabe apart from other Central drivers is confidence. He may not make the smoothest stops or always appropriately use his turn signal (a grave mistake, in the writers’ opinion), but he drives with the comfort of a middle-aged Mount Airy dad.

However, the review would not be complete without a comment on the aesthetic qualities of Gabe’s vehicle. While driving like a Mt. Airy dad may be advantageous, having a car that makes you look like one is not. The car’s color may be described as “bronze” but is more the color of sand at the Jersey shore. The car is quite simply boring. It even smells boring and we’re still not sure how that’s possible. While Gabe parks phenomenally for a teenager, his parking prowess is lost in most situations because his car is unrecognizable, blending in with the surroundings. It is the writers’ contention that he needs to spice up his life–Gabe’s 2002 sedan does not match his extravagant life outside the car. This is certainly not the car of a man who captains both Central’s Ultimate Frisbee and Mock Trial teams.

Though his music selection was questionable and the car’s exterior aesthetic appeal bland, a trip in Gabe’s car isn’t one to be missed. From the insight of Terri Gross streaming from his speakers to his parallel-parking ability, we recommend you take a quick trip in Gabe’s car. You won’t regret it.