Students from Mr. Trott's class perform for a packed audience.

Any student who has had Mr. Trott for English will remember the strange narrative of Helmholtz woven throughout tests, grammar exercises, and vocabulary lessons. Helmholtz, at first glance a figment of Mr. Trott’s imagination, takes on a dramatic chronicle as he dates the most popular girl at school, Alize. However, she soon dumps him for being too “lame,” leaving Helmholtz reeling and desperate to win her back. Mr. Trott’s English 2 Honors class, realizing their teacher would not reveal any more details about their favorite character, filled in the gaps with an aptly named class play. The class showcased its work  after school on June 1 and 2. 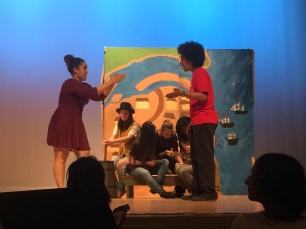 In the play, Alize has recently dumped Helmholtz. Thus, Helmholtz creates a time-traveling machine to impress Alize and regain her affection. The machine does not work properly, as the two travel separately. As a result, Helmholtz spends the majority of the play searching for his ex-girlfriend. The pair travel first to ancient Greece during the Trojan War, then to Tokugawa Japan, and finally to Victorian England before they return to Philadelphia. The various scenes are based upon a selection of books the class read throughout the year: Iliad, The Thousand Autumns of Jacob de Zoet, and Jane Eyre, respectively. 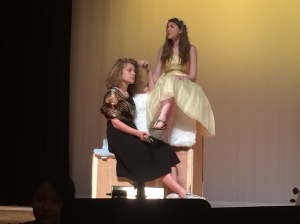 Students act out their roles.

Mr. Trott is no stranger to producing class plays. His 2013-14 class staged a modern twist on Julius Caesar, while his 2014-15 classes adapted the Iliad and a spin-off of The Taming of the Shrew for the stage. “I really enjoy having my classes create plays,” Trott explains. “Two years ago, we made a fun version of Julius Caesar called Friday the 15th and it featured a female lead named Julia. But this year was probably the best. The acting was phenomenal and so were the stage effects. I liked that they used specific books we covered throughout the year. It was kind of an inside joke, but I think even kids who didn’t have me still found it interesting. This class set a new bar.” Helmholtz Trotting through Time sets a great precedent for the years to come.

Mr. Trott and his students increased their ambitions this year to create a grander production than ever done before, complete with a pit orchestra, kaleidoscope light effects, and improved sets and costumes. Darya Bershadskaya (277) fulfilled the roles of both costume director and Artemis. She elaborates, “I was given the opportunity to give the audience a better understanding of what they were watching by simply having context clues with the costumes. This was a very creative, yet demanding experience for me because I realized how complicated it is to organize such a big production and work with other people’s visions and opinions in accordance with my own.” While working with a shoestring budget, Darya needed to design era-appropriate and affordable costumes and sets. She also recycled some sets and costumes from the play Mr. Trott’s class performed last year, the Iliad. Darya continues, “I was really aiming to give the audience an understanding of what they were seeing. For example, if Jane Eyre’s dress was not old and dirty, her character would not have had the same visual on stage.”

An example of a costume used during play production.

One of the play’s co-directors, Karin Hananel (277), expresses satisfaction with the play’s overall production and turnout, but is not afraid to acknowledge the many limitations the class faced that may have hindered its full potential. “I wish we had more time to rehearse and get the whole production together. Between AP testing and Keystones, our actors and the pit orchestra barely got any time onstage, but in the end we pulled it together.” This particular section of English 2 Honors is taken in conjunction with AP European History; the double period served well to the students in both classes. Karin also mentions that part of the director’s job is simply to transfer ideas to actions and bring fiction into reality. “I also learned what it was like to have so many people depend on me and also experience what it was like having the vision of the play in my hands.” However, she notes that although she was placed in charge of realizing the class’s vision, bringing Helmholtz and Alize to life was a true team effort.

Dylan Lewis (277) played Alize and took on occasional directorial duties. She has an extensive background in drama, theater, and singing, thereby making her capable for the lead role. She used this play as an opportunity to grow as an actor and understand the qualities of an effective director. “Being the actor-director helped me see how my own directors work and analyze things and it has given me insight on my own performance techniques,” says Dylan.  Like Karin, Dylan also wished the class could have had additional time to fine-tune the production in order to improve the literary aspects, mainly by developing particular characters further. “I wanted for characters with depth to really express their deep qualities; however, we had really limited time and other things to focus on.”

Setbacks aside, the unprecedented success of Helmholtz Trotting through Time will prepare Central for many creative and whimsical amateur plays in the future. Mr. Trott’s classes only have room to grow. The class charges $2 admission for outsiders to see the play, and this revenue is subsequently allocated to various causes. Last year, it went towards a new water fountain, and this year, it went to the 277 class funds. “We have class plays every year,” Trott remarks. “We’re definitely having another next year.” Next year’s 278 English 2 Honors class hopes to continue bringing Helmholtz’s vast narrative to life.