Thursday, January 12, 2017 marked the first 278 class trip to The Rink at Old York Road. 278 sponsor, Michael Horwits (251), organized the trip and stood up for 278 when the School District was hesitant about sending unchaperoned students to ice skate during school hours. President McKenna agreed with Mr. Horwits by reminding the School District of 278’s remarkable PSAT scores.

Previously, Mr. Horwits has held ice skating trips for 274 and 275, but 278 had by far the best turnout yet. The rink hosted approximately 200 students, which was an impressive turnout, especially because the trip fell on a school night. It was a “great form of stress relief,” according to Frances Yu (278).

During 6th period, students left the school in groups and walked to Olney Transportation Center, taking SEPTA to the rink. Despite the challenges in accommodating transportation for the large quantity of students, everyone was mindful of the limited space on SEPTA and managed to fit into two buses. The class of 278 stayed together and made it safely to the rink where they then rented their skates. 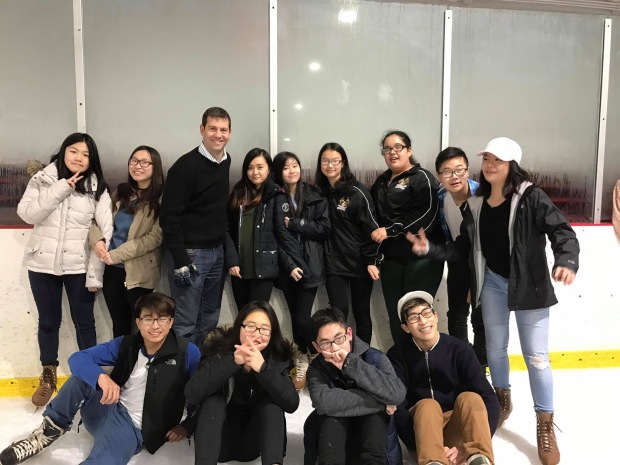 There was a range of skill levels on the rink; some students were experienced while others took to the ice for the first time. Beginners gripped onto the walls for dear life, but many seasoned ice skaters encouraged and assisted the learners in their first steps on the ice. Friends held each other’s hands and skated together, helping each other onto their feet after numerous falls. “Seeing everyone helping each other is fantastic,” said Yu. By the end of the skating session, many of the beginners were skating on their own. Joey Huang (278) said that, “it challenged me to do something new and out of my comfort zone.”

278 is extremely grateful for chaperones such as Mr. Humes, Ms. Zesserman, Mr. Graham, and others who taught students how to skate and assisted in fixing their skates when needed.There was only one injury that stirred up the crowd, regarding a minor finger cut from a skate’s blade. Otherwise, no sophomore was injured during the trip. Everyone enjoyed themselves overall and 278 cannot wait to have another class trip to create more memories together.