On Saturday, September 23, hundreds of people from across the city packed 10th Street in Chinatown for the 22nd annual Mid-Autumn Festival. Families and friends gathered for fun actives such as bungee running, Mahjong, brush calligraphy, lantern-making, lively performances featuring Tae Kwon Do demonstrations, a moon cake eating contest, and the much anticipated lion dance.

Dating back 3,000 years ago to China’s Zhou Dynasty, the Mid-Autumn Festival falls on the 15th day of the 8th lunar month. Traditionally, the Mid-Autumn Festival, also known as 中秋节 ( zhōngqiūjié ), commemorates the goddess Chang E (嫦娥) who engulfed the elixir of life and ascended to the moon. Ever since then, people annually give sacrifices to the moon, or the goddess Chang E, praying for surplus harvest and longevity. Today, many gather to feast on mooncakes (round pastries filled with red bean or lotus seed paste and sometimes containing a duck egg yolk), and show gratitude to the alluring moon goddess.

The vivacious prancing of costumed lion dancers and crackling of firecrackers signaled the start of the annual Mid-Autumn Festival. People crowded the scene as the colorful lions wiggled their heads, amusing the children. The day would continue with an endless number of performances, including traditional Khmer dances from the Apsara Khmer Association,  Kung Fu demonstrations from Philadelphia Wing Chung Kung Fu, and Chinese ballet and jazz from L&M Dance Studio. Dancer Sarah Lin (280) expressed, “It’s my first time attending this festival as a performer, and I am glad that I got to experience this from a different point of view.”

In addition, the festival organized a carnival and arts and craft booths. Activities included riddles, chinese chess, moon bouncing, archery, printmaking, and origami. Despite the 90 degree weather, volunteers and coordinators work assiduously to man the booths. Frank Yang (278), a volunteer, expressed, “It was so hot that I drank 3 bottles of water within an hour; but the excitement and competitiveness of the kids made it a worthwhile experience.”

The evening mooncake eating contest exhilarated the crowd. People cheered as participants devoured their mooncakes. Following the exciting eating contest, a peaceful lantern parade down 10th street closed the evening portion of the festival. All marched behind coordinators and lion dancers down the strip as the rhyme of the gong followed.

Chatter and laughter filled the air as tables spanned the side of the street in preparation for evening games. People pulled up chairs and introduced themselves at tables set for activities including Scrabble, Mahjong, and Jenga. Linda Chen (278), a coordinator, explained, “It was exciting to see people of all ethnicities come together to enjoy the event. I love the buzz of the festival, especially of people talking and laughing while playing games.”

The festival also provided a great volunteer experience for high students in the Philadelphia area, including those from Central. Many members of the Central community played a pivotal role in organizing the festival, such as Amina Fong (276) and Ching Chen (277). “I’ve been coordinating this festival for 3 years and each year it gets better and better,” exclaimed Ching Chen (277). Also, Close to Home, a volunteer service oriented club, sponsored the event, providing the manpower needed for its success. Volunteers had an array of positions such as security, arts and crafts, and manning the carnival.

Chinatown’s Mid Autumn Festival, sponsored and organized by Asian Americans United (AAU), is an exciting opportunity to teach the Philadelphia community about Asian American culture and identity. AAU is an organization centered around helping Chinese Americans to engage in the community and form their identity. Other programs have branched from AAU such as Chinese Youth Organizing Project (CYOP), a leadership program for Chinese immigrant youth to become socially and politically aware of their environment; Civic Engagement/Chinatown Vote, an effort to increase Asian American voting participation; and Inch-by-Inch Garden, a plan to transform vacant lots into green spaces. In addition, AAU founded Folk Arts-Cultural Treasures Charter School (FACTs), a K-8 school focused on the needs of immigrant students and families.

Angela Chow (278), an active member of the Asian community, explained, “Asians are generally the minority in voting with roughly only 4% of voters being Asian, and being involved by raising more awareness about voting in the Asian community was meaningful… Telling people to participate and exercise their rights was fulfilling.”

Lucy Zhu (277) voiced, “The festival provides a great opportunity for all of us, young and old, to come together to celebrate our heritage and identity. Living in America, especially in a diverse community like Philadelphia, we often lose our roots, and it’s events like this that remind us of who we are as individuals and as a community.”

This year’s annual Chinatown Mid-Autumn Festival buzzed with success. AAU represented the Asian American community in an entertaining and informative manner with their modern twist on traditional customs. For more festivities, come and join next year’s event at Friendship Gate*.

*Friendship Gate: Located on Arch St & N 10th St, Philadelphia, PA 19107, the gate serves as a welcoming entrance to Philly’s Chinatown and commemorates the friendship between Philadelphia and the Chinese city of Tianjin

Lion dancer costumes set out for display in preparation for the dance.

Lion dancer costumes set out for display in preparation for the dance. 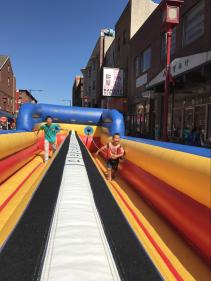 Frank Yang (278) encouraging children to have fun on the bungee run. 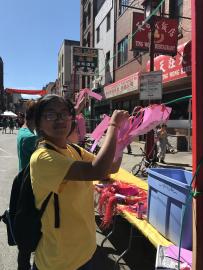 People crowd the streets for the Lion Dance. 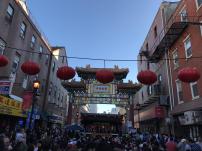 Coordinators signing volunteers in for their shifts.