When people think about Philadelphia, they probably do not think about heroes – much less African American ones. Octavius V. Catto is one of many overlooked black heroes. As a civil rights activist, soldier, and educator, it is no wonder Catto’s achievements are finally brought into the spotlight with a new statue recently unveiled at City Hall on September 25, 2017.

Octavius Valentine Catto was born to Sarah Isabella Cain and William Catto in Charleston, South Carolina in 1839. Around the age of five, Catto and his family moved north, eventually ending up in Philadelphia in 1850. He attended Lombard Grammar School and then pursued higher education at Cheyney University. Upon completing his studies, he returned to Cheyney to teach.

Education was not his only passion. Catto was also a military man, forming the 5th Brigade of the National Guard which was in response to the cry for help Pennsylvania had sent out when the Confederate army advanced in 1863. Catto also fiercely advocated for the right of black men to vote. When the 15th Amendment, which granted that right, was passed, he saw his chance to change the tide of the election for the Republican side. Catto’s political activity was not perceived well by the some members of conservative white community, a group of whom went so far as to stalk a group of black men on their way to the polls on Election Day in 1871. Catto was murdered in the ensuing riot by Frank Kelly, a white Democrat who first confronted Catto, and then shot him three times. There was no police intervention at all on the day of the murder, and Kelly was never convicted of any crime.

Lawrence Copeland, an attorney under the City of Philadelphia Law Department, played an instrumental role in recognizing this phenomenal hero. Copeland accounts that he first received the proposition to work on the project in 2006 from the Public Property Commissioner, Joan Shlotterbeck. “At the time, I had not heard of him. The project seemed quite ambitious and I wondered whether the project would ever come to fruition.” Copeland’s active participation in the project did not start until 2014, “…but [The Octavius V. Catto Memorial Fund] had been working on the project for a few years before that.” Now that the statue has been unveiled, he believes that it will be a powerful hotspot for rallies, protests, and activists alike, as well as a tourist attraction. “It will help spread Catto’s renown to publicize him and the memorial to tourists in pamphlets about points of interest in Philadelphia and on tours of the City.”

When asked if there was any kind of interference from outside companies or parties, Copeland fortunately reports that “the real challenge was to raise enough money to do it.” However, enough donors understood that the money was going towards a worthy cause. “I also think people understood that it was time – really, long overdue – to have a memorial to an African American hero at the place which is the center of our city government. The location of the memorial is almost as important as the memorial itself.”

Copeland shed light on the construction time of the project. Mr. Branly Cadet, the sculptor of the statue, signed an agreement with the The Octavius V. Catto Memorial Fund in 2015. Along with the four years it took to accumulate various artists’ designs of the statue, Copeland estimates that “it took about 18 to 24 months to fabricate the memorial and then install it on the City Hall apron.” This may seem like a lot of time, but “everyone involved supported the idea of the Catto memorial” and “approached the project cooperatively.”

With respect to his clients and colleagues, Copeland discloses that after all the time and energy that went into the memorial, he feels ‘‘proud about [his] work for the city on the memorial project.’’ Thanks to the hard work and enthusiasm of officials like Copeland, Catto will never be forgotten again, and will forever stand as an African American icon for positive, effective leadership and self-expression. 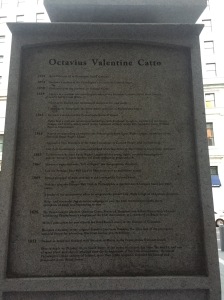 (Click photo to enlarge) A timeline of Catto’s life situated on a pillar behind his statue. PC: Jana Pugsley