February 22, 2018, proved to be a legendary day at Central High School. Not only did our partnering music department from Cleveland Heights High School in Cleveland, Ohio, pay Central a visit to exchange phenomenal musical performances, but so did one of their most esteemed alumni.

Jason Kelce, number 62 and star center of the Philadelphia Eagles, used to not devote all of his time to football. On the contrary, he was a star baritone saxophone player in high school. “Before I was a Philadelphia Eagle and Super Bowl champ, I was a Cleveland Heights Tiger,” Kelce told the audience. “I played in the jazz band and the symphonic winds ensemble and music was a big part of my life.” The honor of Kelce’s visit was organized by his high school music director, Brett Baker, who was also at Central for the performance. 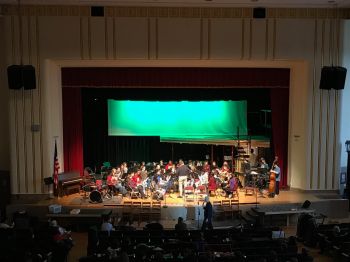 To top it all off, Kelce was stand partners with Fiona Jacobs (279). “I thought he was good, he would jump in and out of sometimes, but it was a hard piece. Pretty impressive after not playing for twelve years!” comments Jacobs about the Super Bowl Champ’s performance. Whether Kelce hit every note or not, his visit, as well as the partnership between Central and Cleveland Heights High School, left a lasting mark on Central.